Ok - I hear you say - why would a woman with so many projects bubbling along want to start YET ANOTHER ONE!!!
However this has a different twist on it......................
It's not me that's starting it but Sarah, my eldest.
In the UK there is a scheme for young people to participate in called the Duke of Edinburgh Award (colloquially known as the DofE). It can be taken at three levels - bronze, silver and gold.
The award at each level has four parts: service, activity, skill and expedition
For her bronze award Sarah has completed 3 months service - helping at a church kids club, and 6 months activity - trampolining. Now this leaves her with 3 months skill and the expedition to do. Her school will arrange the expedition but she has decided to go for patchwork and quilting for her skill.
She has to spend at least one hour each week for three months on it. 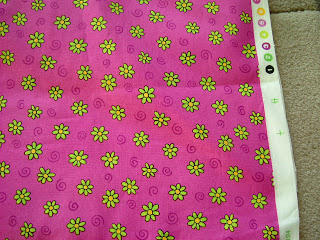 With this in mind, last summer she bought two metres of this funky fabric
Then when we were in Hereford we bought the three others to accompany it. 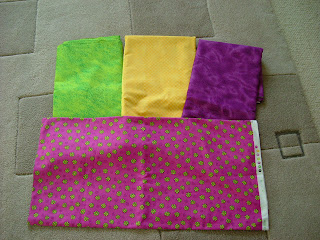 We originally thought about doing a sampler quilt but then she spotted a 'zipper' design on someone's blog I was perusing so we'll go with that, probably in a lap quilt size to sit on the end of her bed.
Another convert :o) 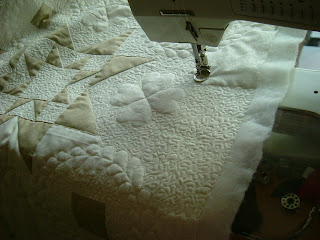 On my front Spencer's Stars is back under the needle as I get on with the fairly tedious job of microstippling all around the edge now - still at least it's making progress
Posted by Unknown at 8:14 AM

Anne how thrilling for you that Sarah is going to follow in your footsteps! We have DoEA here too.

Can I just say how much I love the quilting work you are doing on Spencer's quilt! Are you doing it by hand? Absolutely amazing. And you thought this was a boring quilt - no way! It's stunning. I would hate to give something so beautiful away!

Spencer's Stars is gorgeous, that microstippling is making the trapunto areas absolutely pop! Good luck to Sarah, you must be very proud.

How wonderful to have your daughter quilting. I like the fabrics that she chose & the zipper pattern is so much fun! I can't wait to see the finished product.

Love the fabrics for Sarah's quilt. It will be gorgeous. And your quilting job is magnificent!

That microstipping is amazing...I wouldn't have the patiences for that. Good luck with the quilting with Sarah. Her colour choices are much like my daughter's (age 13) for her Activeight challenge...the bright one on my blog. TTFN

Love your daughter's fabric choices, but could you post a link to the zipper pattern? I see some folks commenting on it and am always looking for new ideas (as if I don't have enough irons in the fire).

Good for Sarah! Wonderful for you to see your love passing on to your daughter! And Spencer's Stars is soooo beautiful!

Oh, Anne, how wonderful that Sarah is taking up patchwork! You two can have so much fun sewing together. And may I say that your micro-stippling is absolutely fantastic!!!

How wonderful for you that Sarah is taking up quilting.

the stippling is looking fabulous....I admire you doing such quilting on such a large area!
The tulips are looking gorgeous too!

How fun that she wants to learn to quilt! Love the fabrics! There are so many fun layouts you can do with the zipper pattern. You will both have fun with it.

OH that zipper quilt is the perfect solution for Sarah's quilt. And her fabric is wonderful! I can't wait to see it come to life! 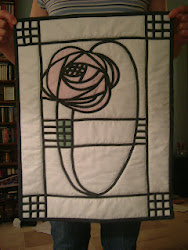 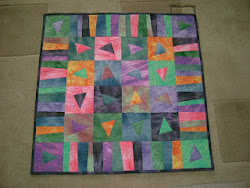